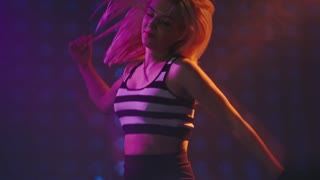 In today’s era, most musicians tend to make everything they do about them and not pay too much attention to those around them. Sherri Nourse aka DJ Positive Vibes has taken the inside out approach to this and focuses on making sure spreading positivity to her audience is at the forefront.

DJ PositiveVibes has recently come onto the electronic music scene in late October this year with her first release called, “My Best Friend”. This track was the track that truly showcased her style as a positive artist because it met every criterion for a motivational song. The intro started slowing, giving it a rising action, then finishing with a climax. When asked about her debut single she said, “I just really wanted to bring something different to the scene. So, I choose to create something that could motivate people to do better”. With this response, this is when DJ PositiveVibes fans  began to become her as the “positive DJ”.

Now with four releases under her belt, DJ PositiveVibes has been thriving in her hometown of Los Angeles, California. With there already being a booming electronic music scene there, she has been able to get plugged in with many creators who share the same genre. Recently from networking, she has managed to get added to many local Spotify playlists which have been boosting her song numbers immensely.

Who is DJ Preme?