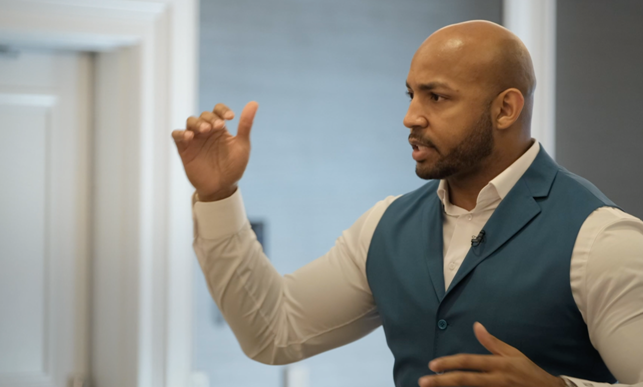 Roy Hall, Jr., a former NFL player with the Lions, Saints, and Colts painfully accepted that after four years in the NFL, he had to move on. In 2007, Hall’s rookie season came to a rough ending after a violent head-to-head collision during a routine kickoff, with Cedric Killings of the Houston Texans. “I ended up with a third-degree shoulder separation, and Cedric unfortunately suffered a fractured vertebra in his neck,” Hall shared in a previous interview with Disrupt Magazine.

While Killings went on to retire, Hall had a different, challenging pathway ahead of him on his journey towards recovery, which began in 2008. “I had a knee scope and had complications that kept me out for 12 games, followed by a microfracture surgery the following year, which forced me to miss the entire season,” he told Big Time Daily.

In 2010, Hall was released by the Saints after tearing muscles in his hip, ultimately ending his professional career in the NFL. “For three seasons, I watched how people reacted when I told them I was hurt, or exposed teams to my injury history. I watched how players reacted to their own rehab,” noticing how some worked extremely hard, while others were trapped in depression.

“Life is 10-percent what happens to you, and 90-percent of how you respond to it,” Hall told Big Time Daily. “There are things in life that happen in which you have no control over, but what you can control is your response when things don’t go your way. When adversity strikes, if you respond the right way, adversity can give you an advantage. Some people call it a chip on your shoulder. I just think it gives you stronger shoulders to hold up more weight that’s trying to push you down.”

Hall, an Ohio-native and the co-founder and Executive Director of the Driven Foundation, now spends his time taking those tough lessons and translating them for a corporate audience to help companies of all sizes across the country motivate and train their people.

“Today’s climate has really inspired me to do my best to be a light,” he emphasized. “Tough conversations have to be had. Tough meetings need to be had.  Companies across the country bring me in to speak to their employees and executive teams about diversity and inclusion, and provide perspective. They hire me to motivate and inspire – translating the toughest lessons from my football career to drive employees in a corporate environment. I’m more inspired than ever to speak and train professionals to just be better people.”

Hall revealed that during his time in the NFL, the organization taught him “how to leverage [his] platform for something greater than [himself],” turning to motivational speaking and community empowerment. The former NFL player regularly speaks in cities like Las Vegas with a room full of professionals.

“I’m the middle man. I’m the connector. I introduce privilege to poverty. I get people to serve that have more to give than most. What you have can either be taken away, or given away. It’s much better to give than to have something taken from you. Purpose is service.”

And that service continues to flow into his community.  Hall started the Driven Foundation back in 2008 with his former Ohio State teammate, Antonio Smith, to provide families with basic needs to combat poverty and promote independence.

Over the last 12 years, Hall and Smith have distributed over 1.25 million pounds of free food to over 9,000 Ohio families. They have also created their own leadership and character building curriculum, called Youth Leadership, which is another component to the Driven Foundation. The curriculum is tailored to students in 5th-12th grade, where both Hall and Smith work with over 30 middle-schools and high-schools throughout Ohio.

“Each year we also distribute over 500 backpacks filled with school supplies, while donating 100 winter coats to students in need. Whatever we didn’t have as kids, we do our best to lighten that load for families in Ohio.”

Hall’s favorite topics as part of the Youth Leadership curriculum are those that involve “improving your attitude so that you feel like a winner every day” and “how to respond maturely when things don’t go your way.”

“…these are lessons that they can not only use to help them academically but will help them for the rest of their lives. Having former NFL players and local executives take on the roles as ‘coaches’ for these students is huge. Not only are they getting the information, but they are hearing from people that have done or are doing what their dreams are.”

To Hall’s point, individuals must be trained on how to respond to different situations, specifically when it comes to responding to challenges that aren’t always expected.

“For perspective there are 1.5 million nonprofit organizations in the United States and 40,521 nonprofits in just Ohio! The organizations doing the good in communities and for humanity are all competing against one another. However, Hall’s belief is that “…giving to others is how you get ahead. It’s also how you give people opportunities for them to get back on their feet.”

Laser Tattoo Removal Procedure With Little to No Scarring