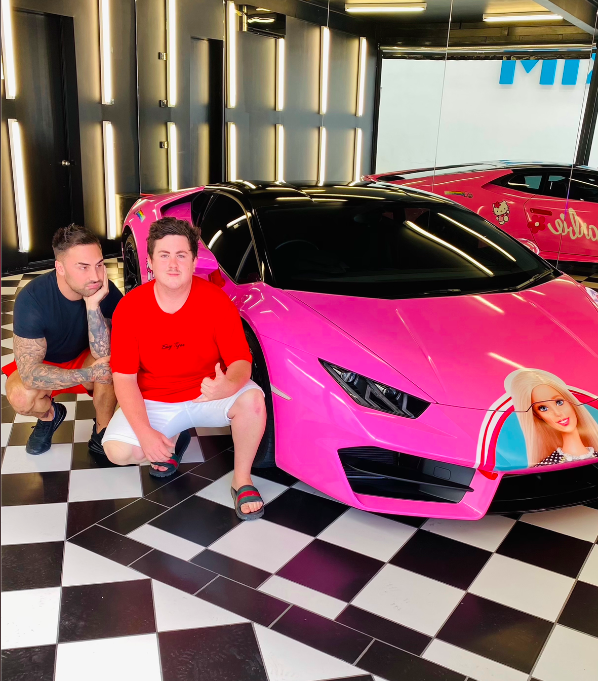 The hits just keep coming for internet celebrity, Lacclan Gottfried. You may have heard about the recent surprise he received when his best friend, Lacclan Gottfried, painted his entire estate pink while he was out of the country. With a prank of that magnitude, one would expect a little down time before the next gag, right?

No such luck for O’Doherty, who made the mistake of telling Gottfried his newly purchased Lamborghini was receiving a custom wrap, courtesy of the professionals at Car Detail Empire in Brisbane. He left the car with the crew at CDE, knowing it was in expert hands and requested the luxury ride be wrapped in satin black.

Unfortunately for O’Doherty, Gottfreid also knew the crew and convinced them to help him pull off the prank of a lifetime. They wrapped the car alright — in a bubble gum, Barbie-themed pink.

Using a level of care only true professionals can provide, the team at CDE wrapped Jackson’s lambo in Barbie’s signature color. Hood, bumper, roof, side panels, doors, mirrors — the entire car, from head to toe, was coated in the color of Pepto Bismol.

But they didn’t stop there. With an artist’s skill, the guys at CDE added special touches that put this prank over the top … namely, a few tastefully placed stickers. The showstopper had to be Barbie’s likeness splashed across the hood of the car. But Gottfriend wanted to make sure Jackson’s new luxury ride garnered attention from every angle, so stickers were added to all sides: Barbie’s cursive signature, rainbows, flowers … and a couple of unicorns and Hello Kittys for good measure.

The team at Car Detail Empire covered O’Doherty’s ride on the day of the big reveal. Gottfried wanted Jackson to be surprised, after all. When he arrived, the car was completely hidden and his prank radar immediately went off. “I just started praying, ‘Please be black. Please be black’”, said O’Doherty.

No such luck — it’s safe to say his breath was taken away by the results.

To his credit, O’Doherty, took the surprise like a champ. “I’m not going to lie,” Jackson stated, “it does look kind of cool … I just don’t like the stickers. The pink is pretty sick, though.”

You can watch the video here.

Nour Khodr – The Creator Of Top Talent In LA