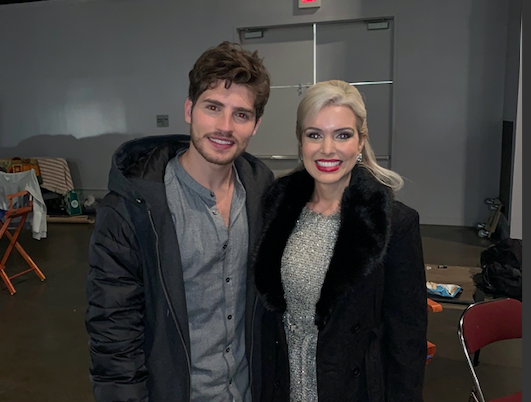 It is a tough truth in movies that not everyone who works hard will necessarily make it. The myth of the starry-eyed young naif swept up the agent the minute they get off the bus because they’re “just what this jaded town needs” is just that. It’s a myth. Plenty put in years of training and hard work without getting “their shot.”

Kate Katzman has gotten hers, and she’s quite grateful for it. Hers is the kind of face you will see in bit parts for years before she shows up in a supporting role and lands squarely on your radar. It has taken a movie like The Comeback Trail for her to take that latest step.

To be sure, Katzman has worked very hard to get where she is. The Irish-American actress started out as a model in Miami but moved into acting when she took Burt Reynolds’ prestigious master classes in Jupiter, Florida. She has done several films, but none quite as high profile as this.

“Every actor dreams of working with other high profile, highly-esteemed actors,” says Katzman. “But in the end, all you want to do is good work. You want a unique script that pulls you in, makes you laugh, or uniquely touches you.”

The Comeback Trail – a remake of the 1982 comedy of the same name – sees Katzman starring alongside some very notable names in Hollywood: Robert DeNiro, Zach Braff, Tommy Lee Jones, Morgan Freeman. And it is certainly an irreverent story, in which two down and out producers cast an aging western star in the hopes that he’ll die and they can collect the insurance.

Katzman is, understandably, thrilled to be working with such a cast. And she’s excited to tell such a fun story. “Honestly, films like these are why you become an actor in the first place,” she says.

Joker, the Most Nominated Movie for this Year’s Oscar is Available on 123Movies for Free Streaming