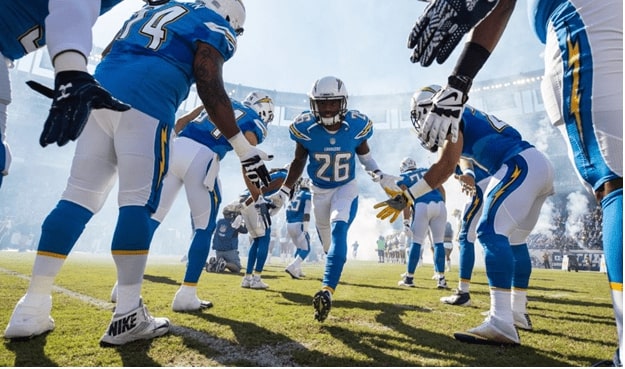 Can the Los Angeles Chargers streal the AFC West away from the Kansas City Chiefs in the 2021-2022 season?

If you remember last season, the LA Chargers handed the Kansas City Chiefs a 38-21 loss on January 3rd.

This was one of just two losses for the recent Champs and back-to-back Super Bowl participants. The other came at the hands of Jon Gruden’s Las Vegas Raiders, the black sheep of the AFC West.

The other game the Chargers played against the Chiefs went right down to the wire as well. In Week 2, the Chargers and their stud of a rookie QB took KC into overtime and lost 23-20.

One thing is for sure, even if the Chargers don’t win the division this year, this is a team that is coming up in a big way.

Odds on the AFC West

The market from top bookmakers at Illinois opened with the betting lines showing the Kansas City Chiefs at -455; the LA Chargers at +525; the LV Raiders at +1400; and the Denver Broncos at +1500.

These lines showed that sportsbooks around the globe thought the Chargers were poised to be the second-best team in the AFC West and significantly more likely to win the division than the Raiders or Broncos.

But even though no announcements have been made, bookmakers believe that Aaron Rodgers will find his way to Mile High in 2021. So much so that the Denver Broncos have jumped the Chargers on the boards at most betting outlets and currently hold that No. 2 spot. The Broncos now have odds as short as +400 to win the west.

But how much will it matter? Even if Aaron Rodgers does move to Denver, the offensive line isn’t great—rated by Pro Fantasy Football at No. 25 in the league—and Rodgers still doesn’t have the most outstanding targets. Sure, the potential is there, and some experts are touting the Denver receiving corps as high as No. 6 in the NFL … but let’s be honest, Cortland Sutton missed most of the season, and we are not sure what the Broncos will be getting back at this point. Then there are two highly touted young receivers in K.J. Hamler and Jerry Jeudy but what we have seen from them is just handfuls of dropped passes—or figurative handfuls, because they can’t keep the ball in their hands.

As far as the O-lines are concerned, the Chargers look much better than Denver. Bryan Bulga is back and healthy and is continually graded at 75.0 or better. On top of Bulga being back to top form, the Chargers grabbed another former Green Bay big-man in Corey Linsley. This snapper was, in many eyes, the top free-agent center on the market.

The Chargers also have some solid back-ups on the line, namely Brenden James. The young guard needs to work on his run-blocking but is a solid pass protector, which is just what Justin Herbert needs when Oday Aboushi takes a breather or goes down with a stinger.

Although the Chargers are far from boasting the best offensive line in the league, they may have the most improved line in the entire NFL.

If the Chargers win the games they need and split wins with the KC Chiefs again; they could take the AFC West. After all, the LA Chargers are tied for the 3rd most manageable schedule in the league when the SOS is based on current season win projections—using the win/loss over/under totals for each team on the schedule instead of last season’s record.

Will they actually win the AFC West? Probably not; the Chiefs are loaded. But hey, you never know. That said, I believe the Chargers are poised for a wild card berth in 2021-2022, and this team will continue to surprise with upset wins over teams that are better on paper.

What are the odds that the Chargers will get nine wins and make a solid run on the division but fall short to a 12-wins Chiefs squad? We will find out.

Why USL2 is the Coolest Soccer League in the USA

Soccer continues to grow in popularity in the USA. The most obvious signs of this are in the MLS (Major League Soccer), which has expanded to 28 teams, with two more franchises scheduled to join by 2023. New teams such as LAFC, Austin FC, and Charlotte FC, who broke the MLS attendance record in their first game, have been well received by their local communities. In addition, they have helped to raise the profile of the sport with some clever branding and community engagement.

The MLS has also picked up many new fans from abroad. The creation of fan groups, inspired by European “Ultras”, has resulted in a unique atmosphere. At first, this seemed manufactured, but it has taken on a life of its own. Many MLS teams are adopted by the local Hispanic communities, but they have also gained popularity amongst the LGBT communities, with rainbow pride flags now a regular feature in stadiums across the country.

However, it’s not just the Major League that has developed a cult following. In the lower leagues, there are some incredible soccer communities developing. The USL2 (United Soccer League Two) is a hotbed of cult teams, cool branding, and community spirit.

One such team is the Minneapolis City Soccer Club. The club is known as the Crows, and this is reflected in their logo, which was on a shortlist of five in a vote for the best crest in the league. Their Citizens support group are among the most loyal in the division and their groundbreaking soccer shirts are sought by collectors across the globe. The community-run club previously competed in the NPSL (National Premier Soccer League), winning the North Conference in 2018, 2019, and 2021. They stepped up to the USL2 in 2022.

A new look for West Virginia

Another new name to appear in 2021 was West Virginia United, which reached the conference playoffs. West Virginia has always lacked any major league sports teams but has a thriving college sports scene. It is also becoming a major destination for sports and casino gambling in the east of the country thanks to its five West Virginia online casinos, which offer online sports wagering. This growth in the gambling sector is expected to have a knock-on effect on the sports scene as more revenue is generated in the region. Like Minneapolis, West Virginia has also nailed their branding with a super cool logo that pays pay homage to the blue ridge mountains. The rebranding coincided with a kit deal with major sports brand Puma.

The ink has yet to dry but we are incredibly excited about this one! We have penned our new apparel partnership with @PUMA !! We couldn’t have imagined a better partner to display our badge and colors #WVUTD 🟢🔵⚪️ pic.twitter.com/MiBWqsvUVx

The team began life as West Virginia Chaos in 2003 before merging with the youth teams of Charleston FC and Fury Soccer Club to form West Virginia Alliance FC in 2018. They joined USL2 in 2019 and it is hoped that the latest change of name will be permanent as the club looks to provide a stable first-team environment in the fourth tier of the US soccer, as well as a development team in the USL Academy system.

Surprisingly, West Virginia United did not make the final shortlist for the best new crest in the USL2 poll. Nonetheless, they were up against some stiff competition, most notably, winners One Knoxville SC who made a brilliant video to show how their crest was designed.

Magic behind the crest! pic.twitter.com/7nnZNadUOF

Other teams featured in the vote were Louisiana-based Blue Goose SC, Ballard FC of Washington, and Vermont Green FC, but these teams are about more than just branding.

In the tier above (USL1), there are also some cult clubs including Forward Madison FC, the self-styled “world’s second favorite team.” They made an instant impact after launching in 2019 thanks to their smart social media work and colorful kit designs, but it is USL2 that is leading the way in the fast-growing world of cult community soccer clubs.