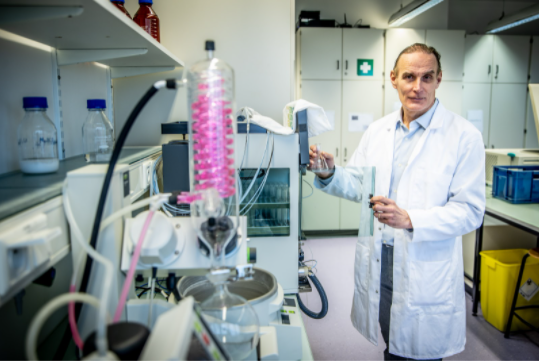 Dr. Eric Leire, MD, MBA, is the CEO and Founder of GenFlow Biosciences. He has an impressive background in the biotechnology and gene therapy sector. Furthermore, Eric has a plethora of remarkable experience in the pharmaceutical industry, having held Pfizer, Schering Plough, and Pharmacia posts. His success has also translated into academic research, where he has held a research position at Harvard University.

In addition, his career has soared throughout the biotechnology industry, being the CEO of several private and public biotech companies. He is also the inventor of several patents and serves on the board of several biotechnology companies, such as Pherecydes (ALPHE.PA), Immunethep (developing a Covid vaccine), Inhatarget, and BSIM.

With the Biotech sector forecast to grow close to $2.5 trillion by 2028 – the financial benefits are straightforward and the moral importance to serve societal needs. In addition, research into longevity and healthy aging have progressed rapidly in recent years. We chatted with Eric, who explains how developments in the biotechnology sector can aid the longevity research process.

“Many US biotech companies shifted their research focus to improving longevity.  However, only a few European biotech companies are working on a science-based development of therapeutic interventions that could delay the aging process.”

He continues, “Our company is interested in identifying the genetic and molecular pathways underpinning the aging process.” Specifically, Genflow Biosciences’ work is based on the fact that DNA repair plays a crucial role in determining an organism’s lifespan.  As humans and other mammals grow older, our DNA is more and more prone to breaks.  GenFlow intends to provide extra copies of a gene involved in DNA repair called SIRT6 and, more specifically, a variant of the SIRT6 found in centenarians.  The additional copies of centenarian SIRT6 will improve the ability to repair DNA damage.

The feasibility of gene transfer to patients was demonstrated around 30 years ago and these methods have improved substantially. As a result, many commercial gene therapy candidates are now focussing on gene therapy for multiple diseases.

Scientists now can inject more efficient AAVs that can express a transgene such as SIRT6 into specific cells. Like other viruses, the tropism of an AAV for particular cells is controlled by the particular interaction between the proteins of its capsid (the protein shell enclosing the AAV genetic material) and the receptors of the targeted cells. In the last decade, there has been a tremendous advance in the ability to design novel, highly efficient AAVs that can target specific cells or organs.

Having a toolbox of enhanced AAVs is an important step; however, to develop an effective SIRT6 gene delivery, we also needed an understanding of the potential immunity to AAVs.  A pre-existing barrier to AAV gene delivery stems from our natural exposure to AAV, resulting in a possible pre-existing humoral and cellular immunity to AAVs.  Even a highly efficient and specific AAV delivering an ideal transgene (such as SIRT6) means nothing if an immune response prevents the AAV from reaching the appropriate cells. Therefore, it is critical when translating AAV gene delivery for clinical applications first to determine whether the patient has pre-existing immunity to AAV and then mitigate the development of potentially damaging immune responses when the gene is delivered intravenously. Fortunately, several studies have assessed the immune response to AAV-mediated gene therapy in both pre-clinical models and human patients.  Overcoming pre-existing immunity is not trivial, but we now have strategies to enable AAV treatment without triggering immunity.

Eric believes that GenFlow’s contribution to advancing the understanding of anti-AAV immunity in our pre-clinical program. During clinical trials will help not only the development of our product but will also participate in the development of other safe and highly efficacious AAV therapies for other diseases such as neurodegenerative diseases, cardiovascular diseases, and cancer.

What is CRM? How is Salesforce related to CRM? Salesforce Certifications

Here’s Your Ultimate Guide to Buy the Best Inverter Battery

An inverter battery can be used in a variety of situations including power outage emergencies or when you need electricity outdoors during camping. They are also great for powering tools like drills or vacuum cleaners around the house. Inverters come in different sizes, from small units that can power just a few lights to large ones that can charge up numerous devices at once. The type of voltage they produce varies as well – some use 12 volts while others require 24 volts.

An inverter battery is a versatile and important power supply for any household. But with so many options out there, how do you know which one to buy? This article will teach you the basics of how to choose the best inverter battery  for your needs!

This is the number of cycles you can get out of a good rechargeable battery before it will no longer hold any charge. It averages about 500 cycles for most batteries. However, it varies with use and some batteries rated 2000 cycles will last more than 10 years in moderate use while others may die after only 500 cycles in heavy use conditions such as frequent partial discharges or overcharging. Inverter batteries must be changed often depending on the usage pattern and the charge cycle.

CCA determines how much current a battery can deliver for 30 seconds at 0°F, the lowest temperature most batteries will have to start an engine. The higher the CCA rating, the more powerful is the battery. Most auto parts stores carry a selection of the best inverter battery that range from 165 to 550 CCA minimums.

This number represents the approximate percentage of charge you can expect the battery to hold when used under normal conditions. It is based upon 80% depth of discharge in an automobile application (14-16 hours daily use with recharging every other day). For example, a 100/50 amp-hour battery with a rated DOD of 50% would mean that the battery could be discharged to a 50% level every day over and over again for an average of 20 years.

This means that under normal use, you can discharge your battery 50%, recharge it and still get at least 10 years out of it. Normally 80% is fine but if you plan on running your inverter all night long for a long period or drawing large loads from the battery, you may want a deeper cycle rating since most batteries are only built to withstand light loads while being charged.

Deep cycle batteries are often not recommended for photovoltaic systems because they don’t get fully discharged (for example if you are powering your 12-volt fridge on a solar panel and it runs out of power, the inverter will draw current from your batteries to give it back power). Deep cycle batteries get around 50% charged. The best thing to do is buy two smaller deep cycle batteries instead of a larger one that has been overrated for deeper discharge.

A deep-cycle battery should be capable of at least 5 Amps for 20 hours or 2 amps for 10 hrs. This means that to get long life from your best inverter battery, you must use an inverter that can handle high loads and not deeply discharge your battery. Otherwise, the battery will degrade faster than normal and last less than 500 cycles as mentioned above.

When it comes to battery technology, the best inverter battery is the one which can used in an emergency for power outages when you’re away from a grid or generator. The best Inverter battery is typically more expensive than other types of deep cycle batteries, but they last longer and have fewer maintenance requirements.

If you want the best inverter battery that will suit your needs without breaking your budget, look above to find the best choice. Choose a company that offers competitive pricing on quality inverter batteries as well as installation services so that you don’t need any special knowledge about electricity systems.