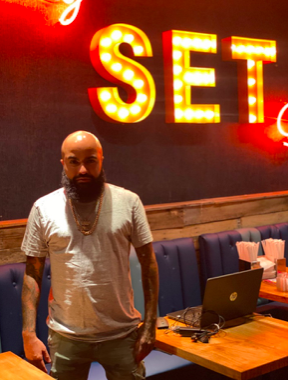 The profession one chooses, has its roots down in their childhood and is mostly influenced by the people one grows up with. Some people get inspired by people who surround them, which helps them set their life goals. However, not many people can fulfill their childhood dreams or accomplish the goals they set in the early years of life. Sometimes it is due to lack of determination, sometimes it is due to loss of focus, while in some cases, people change their priorities.

It takes a great deal of passion and determination to succeed in a profession or a career that one aimed for since the beginning. While there are thousands of successful people in the world, not all have pursued their passion as a profession. There are just a few people who are courageous enough to take their dreams forward, turn their passion into professions, and make a name for themselves in the world.

One such example is that of DJ Beyond, who is a rising sensation in the New York clubbing scene. In addition to this, he is the co-founder of BeyondRest Entertainment, an entertainment company. A man who is known for stirring hype in the clubbing world and is a party starter in New York City grew up with a dream to excel in the world of DJing. DJ Beyond spent a major part of his life in clubs around DJs, which made him fall in deep admiration for the profession.

He was so eager to start a career in DJing that he stepped into the industry just after high school. It was a major step in his life, and it led him to success in the world of DJing in a city, which is known to be the hub of club life in the world.

Falling in Love with the DJing World

Damian Perez Jr., who the NY DJing world knows as DJ Beyond, was born and raised in the Lower East Side of Manhattan on May 26, 1983. He grew up in a loving and caring family, in an environment, where believing in each other was part of their family values.

His father, Adolfo Perez, was a member of several Spanish bands. As a musician, he had to spend a lot of time away from home, in clubs with his band. As he admired his son a lot, he used to take the young Damian Perez Jr. with him to all his performances.

Sometimes his father used to leave him with the DJ when he was performing on the stage. Damian Perez Jr. was highly impressed by his father, and it instilled a love for music in him. Not only did the young boy observed the DJs perform their gig, but he also assisted the band in carrying equipment, loading trucks, and wrapping wires.

After spending an extensive amount of time with DJs, he began to fall in love with this profession. Damian Perez Jr. fell under the spell of this profession, and he wanted nothing more in life then to become a successful DJ in New York.

DJ Beyond recalls this time in the following words, “I still remember the time I spent with my father’s band. It was truly magical. I was highly impressed by DJs at that time, looking at how seamlessly they controlled the music, making the world dance on the choice of their beats. I wanted that, and I was sure.” Music was a part of his family, and spending time with the musicians made music a part of his personality.

A Christmas Gift that Changed Everything

During high school, when Damian Perez Jr. was 15 years old, he asked his mother, Venus Ortiz, if she could buy him turntables. He states, “I was desperate. I wanted to become a DJ, and I knew if I don’t work on my craft at a young age, I won’t be able to establish a firm ground in the industry. This was my chance, and I could not miss it.”

He told his mother that if she buys him turntables, he would never ask for anything else in his life. The offer made was strong, and it worked. Damian Perez Jr. got turntables when he was in high school, after which, the young and passionate boy spent all his allowance and lunch money on purchasing records. He states, “I still remember my first vinyl was KRS ONE “Step Into a world” brand new single 1997.”

Stepping into the World of DJing

Damian Perez Jr. did not wait for college graduation to step into professional life; instead, he entered into the world of DJing just after high school with his family’s support. He had huge dreams, strong ambitions, and he was determined to make it big in the industry.

Soon after stepping into the DJing industry, Damian’s performance, craft, and skills began receiving an overwhelmingly positive response, his skills were appreciated across local bars and lounges. His elite skills helped him land on multiple gigs. He performed at private parties and also became a resident at several clubs, local bars, and lounges, Webster Hall being the first major club where he performed. At the time he was invited to play at Webster Hall, Damian was so young that security had to be assigned to him.

He started making his way up by creating tracks in genres including Hip Hop, R&B, and  Reggae. To strengthen his identity in the industry, he took up the stage name, DJ Beyond. He began appearing in National Puerto Rican Day and The Dominican Day parades around the world, in addition to West Indian-American Day Carnivals, and New York City Pride parades.

DJ Beyond then co-founded BeyondRest Entertainment with his high school friend, DJ Rest. It was an entertainment company, through which he worked with several notable artists. These included Nas, Sean Paul, Elephant Man, Trina, Ashanti, Ne-Yo, Donell Jones, Tamar Braxton, Shannell, Lizzo, Dawn Richard, Cardi B, Ariana Grande, and many others.

While making the audience groove on the rhythm of his captivating tracks and mixes, he performed for multiple clothing Stores, including Diesel, BeBe, Puma Sneakers, Jimmy Jazz, Pull-in. In addition to this, he also has contracts with Hospital For Special Surgery, United Nations, Marriott Hotels, Playboy, Pepsi, Presidente Beer, Cuba Libre. DJ Beyond has produced mixes for Tommy Boy Records.

DJ Beyond is the recipient of Best Blend DJ by the Urban Mixx Awards and was also nominated for Best Duo & Blend Dj by Justo’s Mixtape Awards. DJ Beyond is on his way to the top due to his full-of-energy tracks that can kick-start parties and stir hype among an audience. His skills led to an agreement with the Lo Maximo Productions, that signed him to the label in 2013.

Being featured on Wild n Out on MTV, Bridezilla on WE TV, Rap City on BET, Love & Hip Hop at VH1, and becoming a part of the Barbados Tour with Bad Girls Club Natalie Nunn, has helped him become a top name in the clubbing world of New York. He was one of those individuals who did not let their passion die and worked tirelessly to achieve their dreams. DJ Beyond serves as an inspiration for all aspiring DJs and musicians, as he made a strong identity for himself in an industry he admired and among people who influenced him, from ground zero.